I was reminded earlier this month that some of you are new enough to the blog that you haven’t seen me talk about the Geek-A-Long blanket(s) yet. So, here’s an update!

First of all, what is the Geek-A-Long?

The Geek-A-Long (AKA the GAL) was started by Lattes and Llamas in 2014 to “improve our double sided knitting skills, raise awareness for Child’s Play Charity, and donate our Geek-A-Long blanket to their cause”. It’s a “year long mystery knit along” where participants knit geeky squares and then join them together into a blanket. Since the GAL started in 2014, L&L has raised over $6,000 for the Child’s Play charity — from donations (you can donate here, if you’re so moved) and sales of their special Geek-A-Long Yarn.

Child’s Play Charity provides games and toys to kids in hospitals and they recently expanded to include families in domestic violence shelters. Through the use of video games, these hospitals and domestic violence shelters are able to entertain, distract, and interact with children through the power of play. To learn more about the charity and ways to help the cause, please visit their website for more information.

Every year, L&L has knit up the squares they’ve designed, joined them into a blanket, and sent the finished blanket off to Child’s Play for their annual fundraising auction. (All of the links in that sentence are to the completed blankets from 2014 – 2018.)

Okay, that’s the basics. But what about the details?

First of all, if you are a knitter or crocheter (or you do cross-stitch, embroidery, or some other craft and want to join in and get creative with it) there’s a big, pretty active group on Ravelry where you can chat with others who are making these blankets. (Note: You will have to be logged in to Ravelry for that link to work.) If you’re just interested in seeing what squares they’ve designed, they are shown here. (You will note that they do get more complex as the years go on.)

If you want to start but are new to double-knitting, that’s just fine. I hadn’t done any double knitting before I started my first GAL blanket, either. As long as you start with a simpler square (and maybe a sampler swatch) you should be okay. There are lots of people in the Ravelry group who are happy to help out, too.

That’s all fine, but we came here for pictures!

Okay, okay. You shall have pictures. 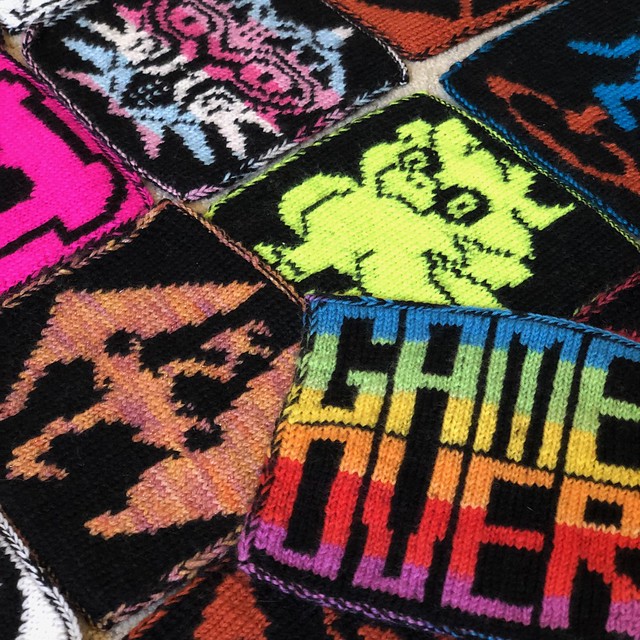 (That square with the sparkly orange dragon? That’s the finished Skyrim square.)

When I started the GAL in 2016 to make myself a geeky blanket, I decided I was going to use it as a way to use up sock yarn scraps. I’m using black as one of the two colors for each square to keep it consistent, but many of the colorful yarns are scraps. The other contrast yarns are often a specific color yarn I bought to go with the individual square. (As an example, the Portal square called for very specific colors which I didn’t have in the stash.) 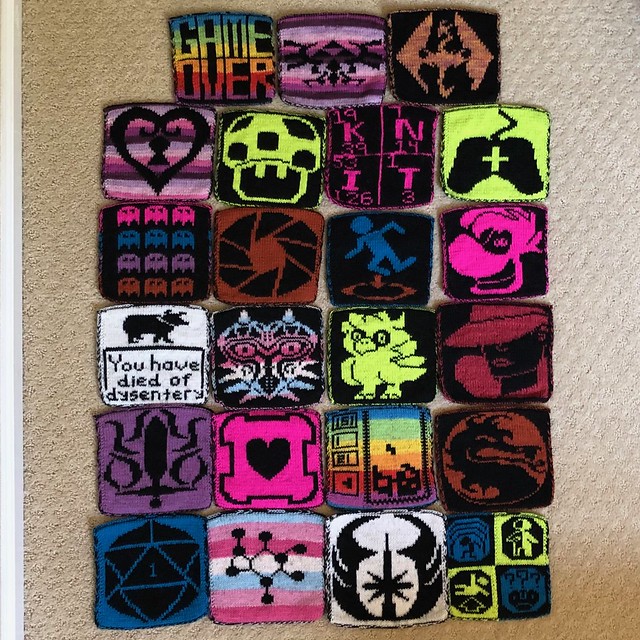 Because I am knitting the squares at a smaller scale than the pattern is written for (I’m using thinner yarn) it will take me more squares to make a full blanket. I’ve been combining squares from all of the years (except 2015 because the dimensions were different) to make my blanket. 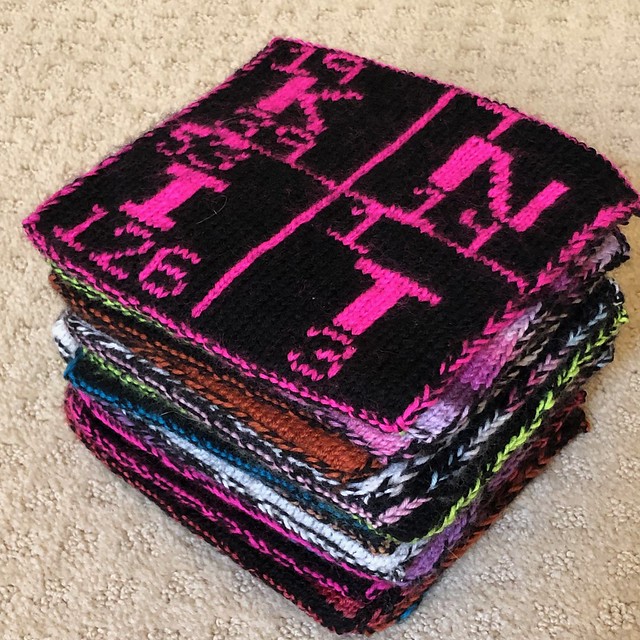 And then L&L decided on a Marvel vs. DC theme for 2017. And I got this crazy idea in my head to knit a gift blanket for some loved ones who love the comics. But… maybe not. I mean, I hadn’t finished my own GAL blanket yet. I would be crazy to knit two at once. 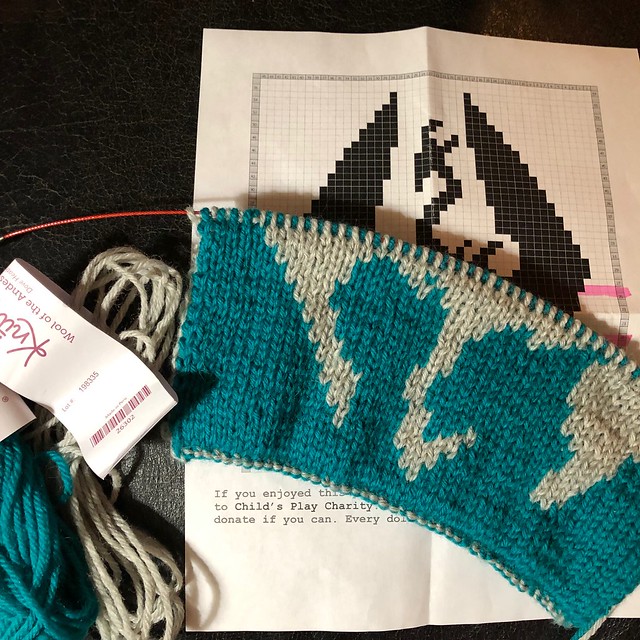 So of course I cast on a gift blanket, too. 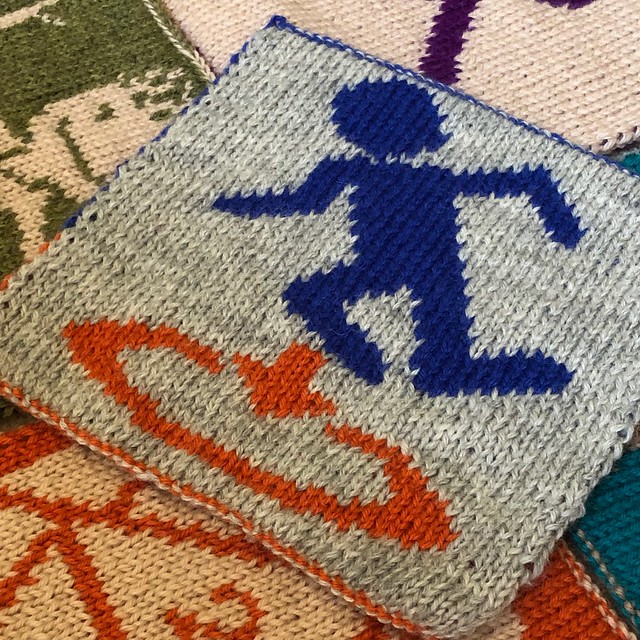 I mean, I gave it a lot of thought first. I started thinking about it in 2017 but didn’t actually cast on until sometime in 2018, that’s how long I was considering it. And I used worsted weight this time, so that the squares would be larger and I wouldn’t need to knit as many of them. 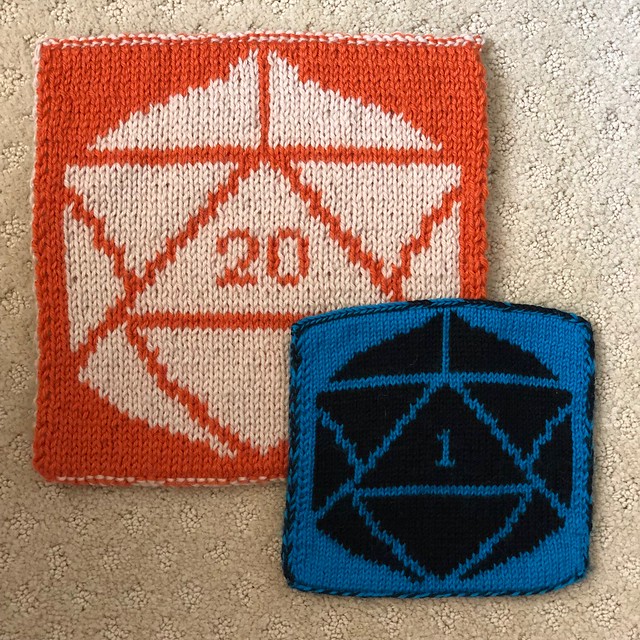 (Thank you for requesting this blog post — while I knew intellectually that there was a significant size difference between the two blankets, I’d never done a comparison pic before! This is a huge size difference!)

But the end result was that I had two GAL blankets on the needles at the same time. For a while I tried knitting on both at once, but it was too much for my brain. Instead I’ve been focusing on the gift version, and will start working on the one for myself again once this one is finished. I don’t know when that will be. I tend to make ambitious plans which are as often derailed by other ambitious plans to do something else entirely. But I will finish this eventually. Hopefully sooner rather than later. 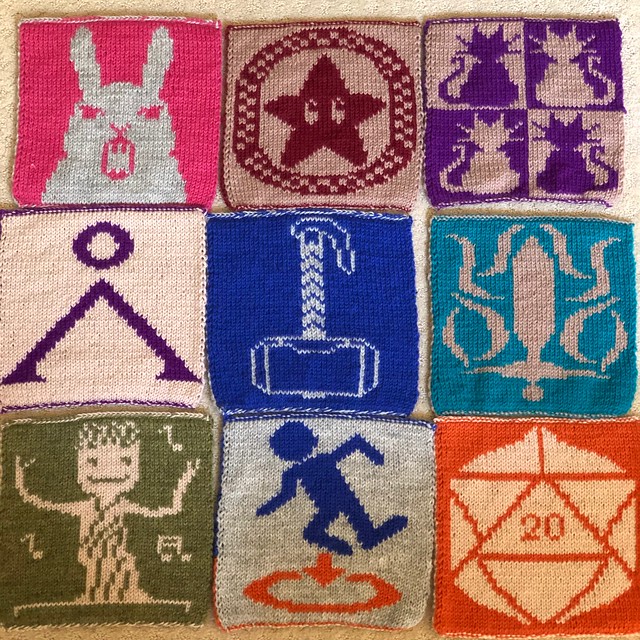 And when it’s done — when they’re both done — they will be awesome.