I think it’s time for another WIP Wednesday. There won’t be much in the way of pictures, but I can give an update anyway.

First of all, a NaNo update: I decided to handwrite this year’s NaNoNovel, and it’s not going as fast as I’m used to when I type. I knew this would be the case, but I hadn’t considered HOW MUCH the change in writing style would impact my word count. (I’ve decided to not aim for 50k this year, but to aim for establishing a writing habit. That seems more logical this year, all things considered.) I’ve only written a few thousand words, instead of the 10k I would need to have finished to be on track to win this year. Oh well, I think it’s more of a win for me if I can get myself into the habit of writing regularly, no matter how fast I am writing.

Secondly, a gift knitting update: I’m nearly done with the Cupcake Mitts, but I’m not showing any more pictures until after they’ve been received. I will show you a picture of my newest gift knit, because I don’t think the recipient for this one reads my blog. But also because it’s only just started and so doesn’t look like much yet. Here is the Honeydukes Hat (designed by Jacquline Cappuccino of Lattes and Llamas and Geek-a-long blanket fame). 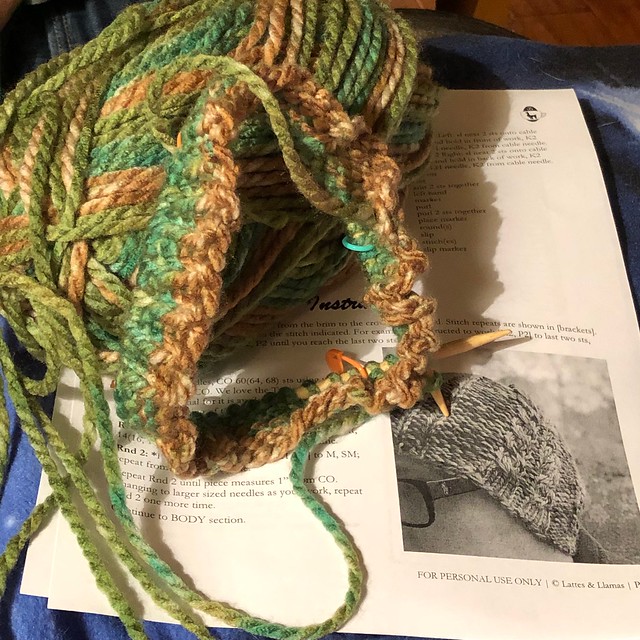 I’m enjoying it so far, though I had to use a size smaller needle for the cast-on because I didn’t own the correct size and was too impatient to wait until I could go back to the store to buy a US9. Given the person I’m gifting this one to, I think it will be fine. I’ll need to pick up the larger size needle before making any more of these though (and I do have more planned) because of differences in head size.

I have also been knitting things for me, but slowly. The Close to You shawl is still in progress, but I still don’t think it has grown enough to warrant a new picture. (Though, knowing how these things go, I probably won’t realize how much is has grown until I take a new picture.) I’ve also been working on my Dryad Hat, but since that one is for me — and has been causing difficulties, causing me to start it multiple times because the ribbing got twisted in odd ways or I accidentally started knitting in the wrong direction — it hasn’t gotten very far yet, either. I’ll probably include pictures of both of these next week, just so that there’s something to show.

Have a great rest of the week!